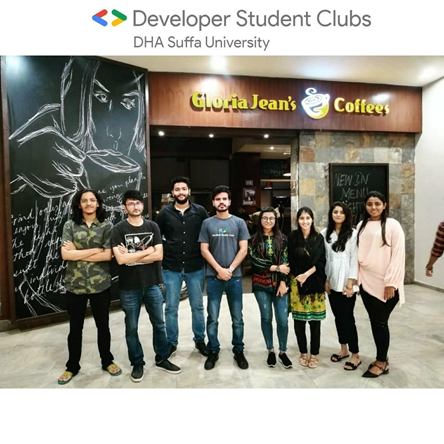 This was the best moment of my life, when I got an email in the middle of the night and I opened it and it said you’re selected for the Google DSC Lead for your university, it was like a dream come true because no one applied before, I was the first one in my university to be selected at a company like Google, with all the happiness, it also came with a lot of responsibilities.

The first time Google DSC came into our campus, everything felt great until we all were hit with the covid outbreak and all of the educational institutes were closed and so were the plans of doing tech events, talks, and Bootcamp but GDSC took covid as a challenge and shifted their all activities online using Google Meet.

The problem GDSC solved is that we provided a proper roadmap to learning specific technologies. If someone wanted to learn Front-End Development, we conducted an online Bootcamp of Flutter with a proper roadmap and guidance from the experienced alumni network.

We encouraged all Engineering Departments in our university to join us and told them the importance of Software and now most of them are involved in learning software. 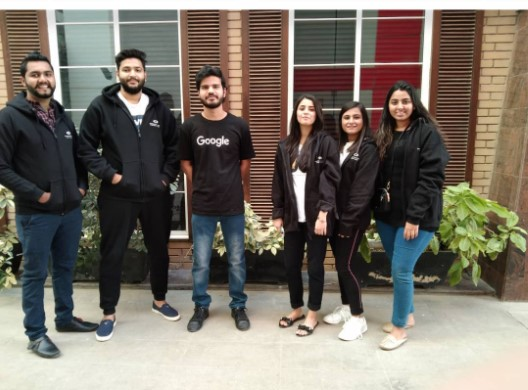 The formation of a team is always the problem, the right talent and team can do wonders for your chapter. Our Recruitment process was strictly based on merit and the right talent where the A talent quota was made to recruit five males and five females to be in the team. The same ratio of gender diversity can make your team more successful as compared to teams with less gender diversity.

“No nation can ever be worthy of its existence that cannot take its women along with the men. No struggle can ever succeed without women participating side by side with men. There are two powers in the world; one is the sword and the other is the pen. There is great competition and rivalry between the two. There is a third power stronger than both, that of the women.” ― Muhammad Ali Jinnah

In the computer science industry, there is very less amount of women’s working and the problem is that they are not encouraged and motivated to work in tech, we broke that stereotype, made it compulsory for every core team member to attend which resulted in female students discover Flutter and felt in love with the technology, now their vision is more clear and they aim to become Flutter Developers after graduation. 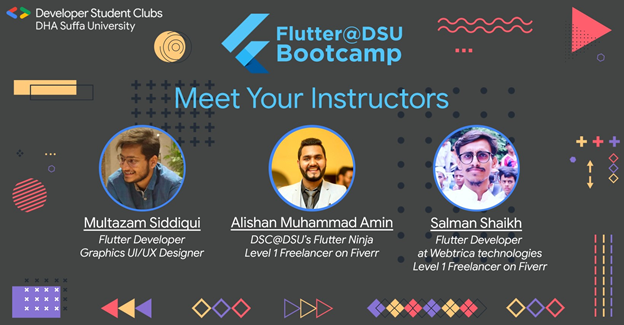 Flutter BootCamp was the first online Bootcamp in DSC Pakistan which used to be held on weekend days like Friday, Saturday, and Sunday at 9:00 PM, which became an ideal time for students where we had an attendance of more than 90+ students in a single class. After Bootcamp, Gave paid internships to the top three performers.

A student from India, reached out since Urdu and Hindi are similar. The journey became easier to learn Flutter in Urdu. Link: https://youtu.be/0skllE5Ca8Y 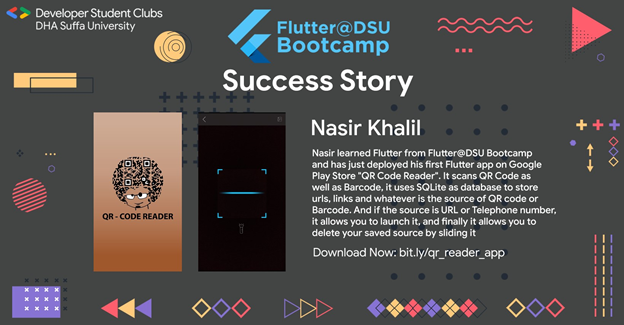 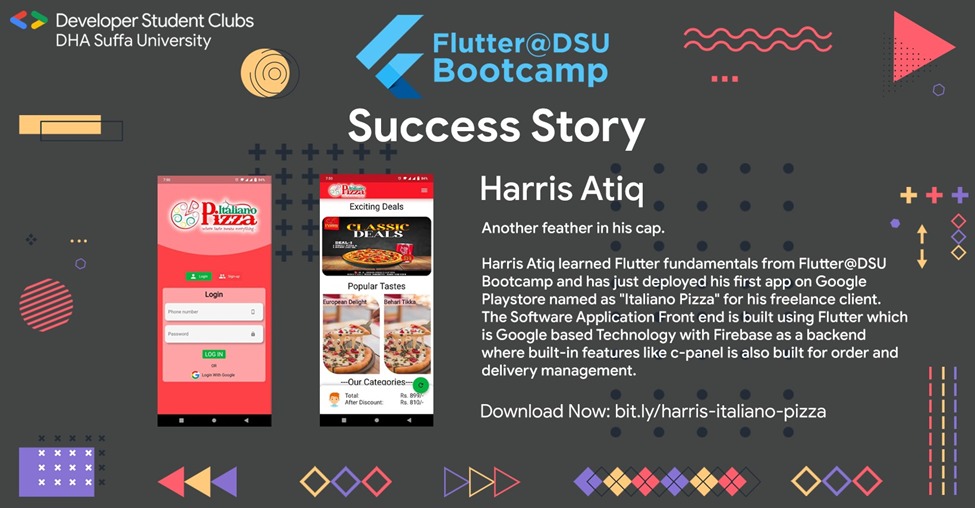 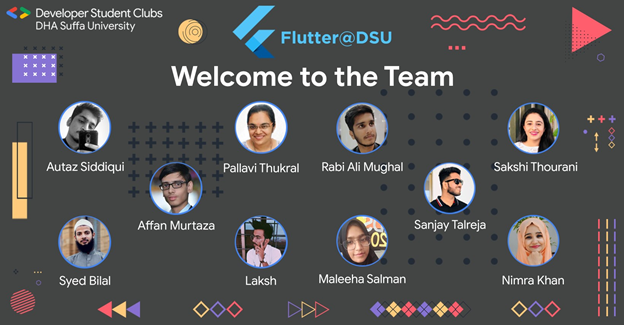 But teaching Data Science, which is now in Pakistan with very few opportunities, was still a long procedure because it has requirements to be fulfilled and a bigger roadmap than any other technology. We understood the problem and made a decision to make a Bootcamp completely focused on learning Python and planned later to start Data Science Bootcamp. 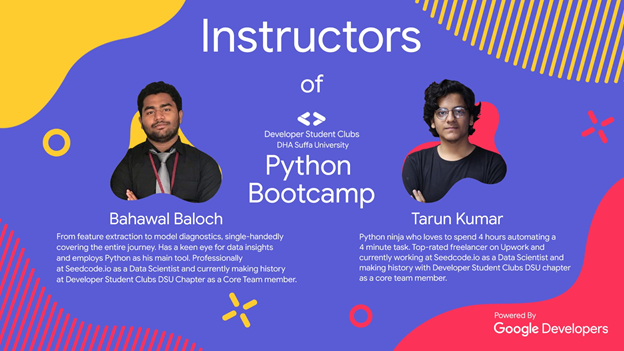 A series on interactive study jam on Python, where the core focus was to teach Developmen and Automation conducted by top-notch freelancers from DHA Suffa University in which concepts related to real-world programming were focused by core team members Tarun Kumar and Bahawal Baloch.

Python Bootcamp was a huge success with more than 100 participants, who joined class on weekends, not only from DHA Suffa University but all the universities in Karachi collaborated. Just After BootCamp, we were fortunate enough to be reached out by DataCamp Application for Premium accounts Sponsorship and it changed all the confusion of us teaching Data.

We received a generous amount of DataCamp Premium account in which we shared with most of the students not only in DHA Suffa University but to most of the universities in Pakistan and some good friends from Malaysia.

GOT SPONSORED BY DATACAMP

We also got sponsored by Silicon valley based Edtech startup DataCamp with 500 accounts. one account cost 60K PKR making us the only chapter to get this sponsorship. 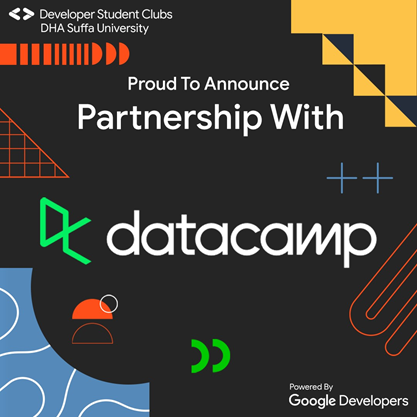 In a world full of cyber security threats, we need defenders who can help us save the world for good, so our last Bootcamp was focused on cyber security teaching people fundamentals, and acing their technical interviews. 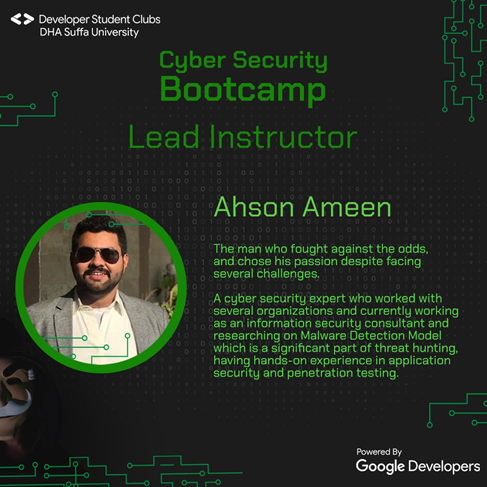 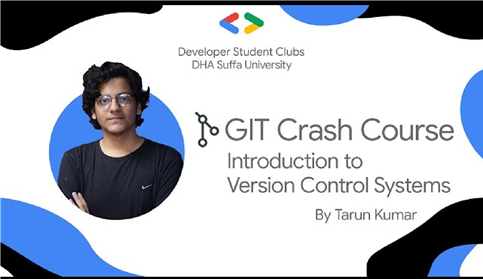 Breaking Records and Creating History was the main vision in which we also identified a major issue where students were not implementing the concepts of version control system, in which an ultimate guide series was made in native Urdu language to educate students. ( we taught GitHub basically :D)

As a society what we face is students don’t read besides their course. We discussed the idea with our Vice-Chancellor and now we have a bookshelf of self-help books like Seven Habits of Highly Effective People, How to Win and Influence Friends, Think Like a Monk, and Tony Robbins.

Organized the First and only Virtual Hackathon in DSC Pakistan with 5 teams participating and the judge was from our alumni network, who had experience in hackathons like Junction Finland and Hack north Canada.

We Taught something, that is not even taught in IVY League Schools 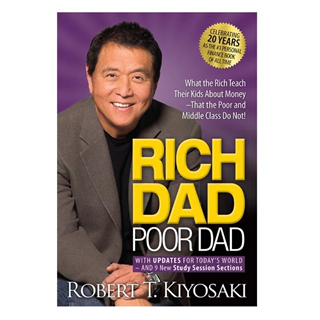 One thing that all schools don’t teach us is Financial Literacy. How to manage your personal finance. We initiated the idea with the reference of books written by Robert Kiyosaki.

Finally, I couldn’t have done all this without my team. I would like to thank my core team for believing in my ideas for a better future. sir Shaham Mahmood, Specially Pro-Vice-Chancellor Dr. Ahmad Saeed Minhas for his strong support.